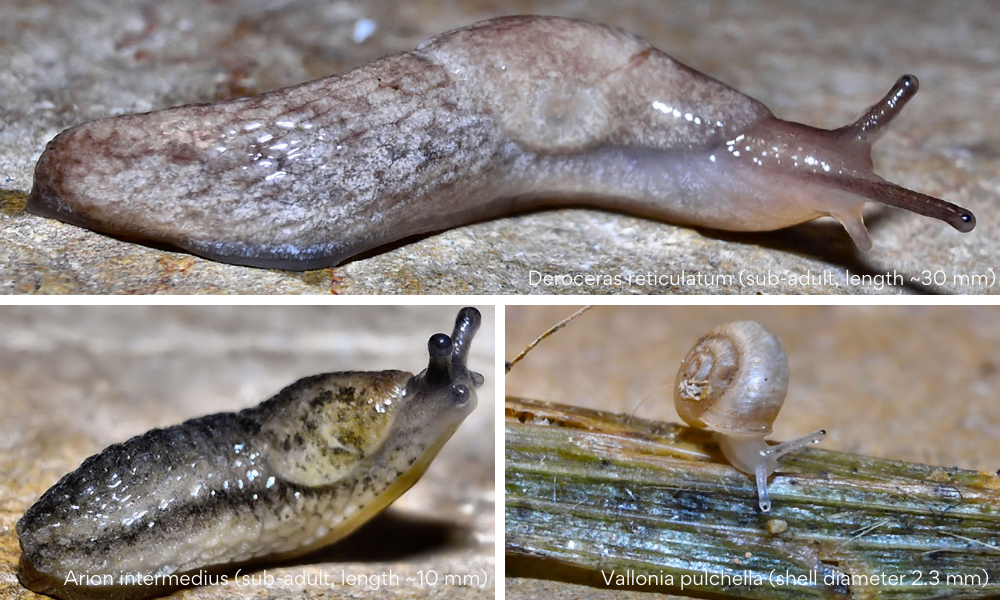 Unique collections held and curated at the Museum are a useful reference tool that allows monitoring long-term environmental changes in the protected areas of KwaZulu-Natal, when supplemented by the data obtained during our latest fieldwork season.

Interesting observations on introduced snails and slugs have been made recently as part of the Ezemvelo KZN Wildlife project on eradication of invasive alien plant species in the uKhahlamba-Drakensberg Park. https://www.nmsa.org.za/news/10-news/360-surveying-ukhahlamba-drakensberg.html

In 2001, Dr. Herbert found four invasive alien species “under exotic trees near office building at Highmoor Nature Reserve (Giant’s Castle area)”: Cornu aspersum (Müller, 1774), Deroceras cf. leave (Müller, 1774), Arion intermedius Normand, 1852 and Zonitoides arboreus (Say, 1817). Twenty years later, we have revisited that locality and observed some changes in the “alien assembly”. The largest introduced mollusc Cornu aspersum (common garden snail) is no longer found there (possibly because it did not survive sub-zero temperatures during one of the winters at 2000 metres above sea level). In addition to the other three species that have been seen there again, another two alien species Deroceras reticulatum (Müller, 1774) and Vallonia pulchella (Müller, 1774) have been found at exactly the same locality for the first time.

Snails and slugs can easily be distributed with soil and plant material. It is important to record all the localities of each introduced species in order to ensure that they would not spread into the natural environment and would not be transported into other protected areas.