Discovery of new species and records of rare African wasps

The ongoing exploration and documentation of the huge diversity of unknown wasp species in Africa has recently led to the description of new species of rare parasitoid wasp species, several of which are only known from narrow distributional ranges in South Africa. Parasitoid wasps in the platygastrid subfamily Sceliotrachelinae are economically important in that some attack hemipteran pests of citrus. These species are tiny, with the adult wasps often less than a millimetre long. We described seven new species including representatives of two rare genera that are endemic to South Africa. These two enigmatic genera, Afrisolia and Sceliotrachelus, were previously monotypic, meaning they were each only known from the type specimens of a single species from a single locality. Afrisolia anyskop van Noort & Lahey, 2021, Afrisolia quagga van Noort & Lahey, 2021 and Afrisolia robertsoni van Noort & Lahey, 2021 were added to the genus Afrisolia represented only by the holotype specimen of Afrisolia obesa Masner & Huggert, 1989 collected in Makhanda (Grahamstown) in 1955. 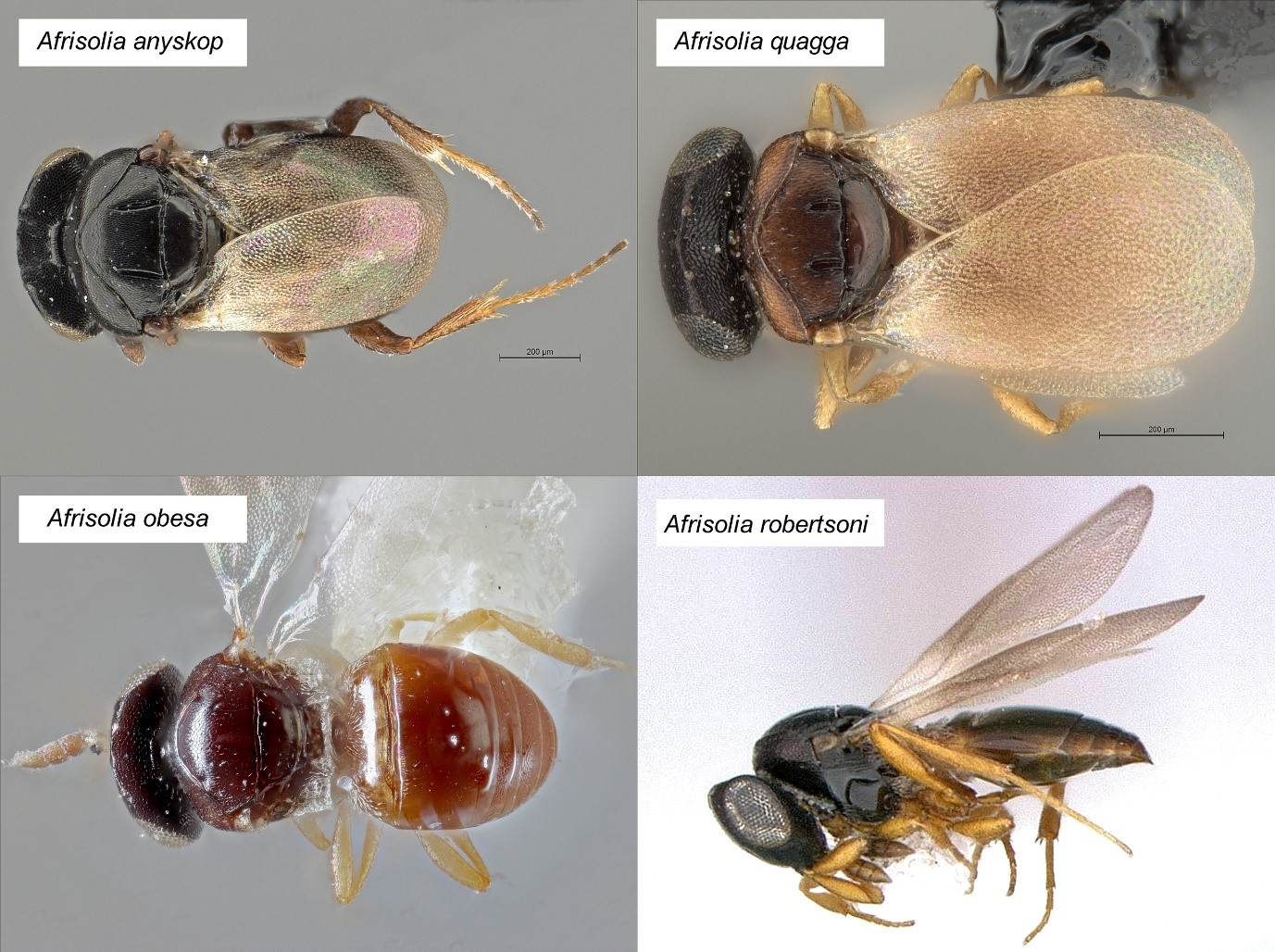 Sceliotrachelus was known only from the two male type specimens of Sceliotrachelus braunsi Brues, 1908 collected in Algoa Bay in 1896. Two new species, Sceliotrachelus midgleyi van Noort, 2021 and Sceliotrachelus karooensis van Noort, 2021, were described from the Eastern and Western Cape, respectively. We also discovered and described the female of S. braunsi, collected in the Kirkwood valley at several sites during our invertebrate survey conducted as part of the SANBI Conservation Farming Project in 2001. Sceliotrachelus species have very unusual morphology, with the toughened wings reduced or held in close apposition to the body, much as in beetle elytra (i.e. creating a protective shield), and have probably lost the ability to fly. Given that most specimens were also collected via leaf litter extraction, pitfall traps, or yellow pan traps, we hypothesize that the evolution of this morphological form is an adaptation to living in leaf-litter. Their biology and host species are unknown. 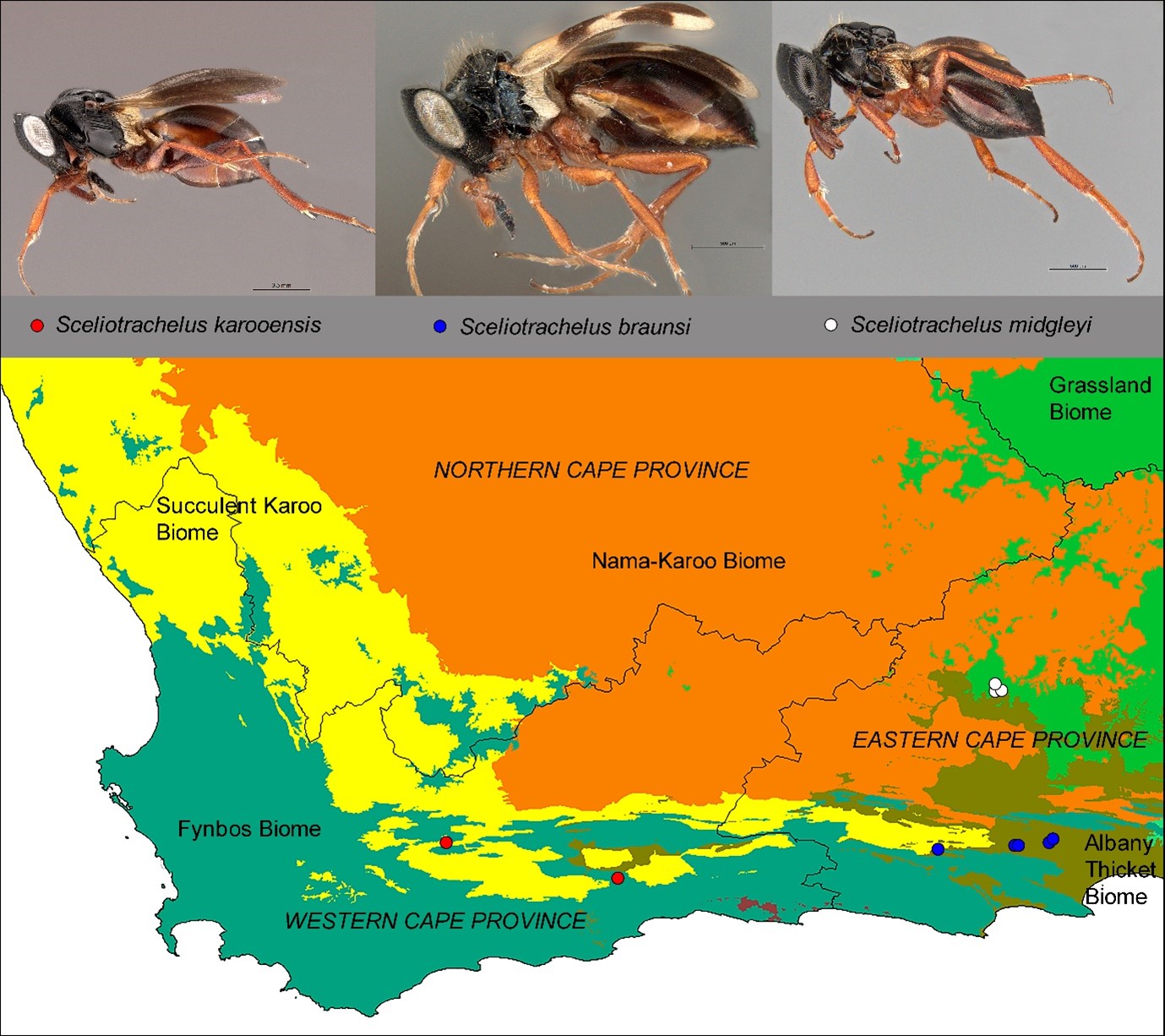 We also described two charismatic and remarkable new South African species, Parabaeus nasutus van Noort, 2021 and Fidiobia celeritas van Noort & Lahey, 2021. Parabaeus nasutus has a weird nose-like projection on the face, hence the species name, and if this has a sensory function it may be used in the process of host location or mate recognition. We have a very poor knowledge of the biology of most of these genera with no records of which host insects they attack. There are still many species to describe and much work is still needed to figure out their biology and the role that they play in ecological processes and ecosystem service. We developed an interactive online Lucid identification key to the sceliotracheline genera (available on WaspWeb http://www.waspweb.org) to help with the ongoing exploration and documentation of the poorly known African fauna for this group. 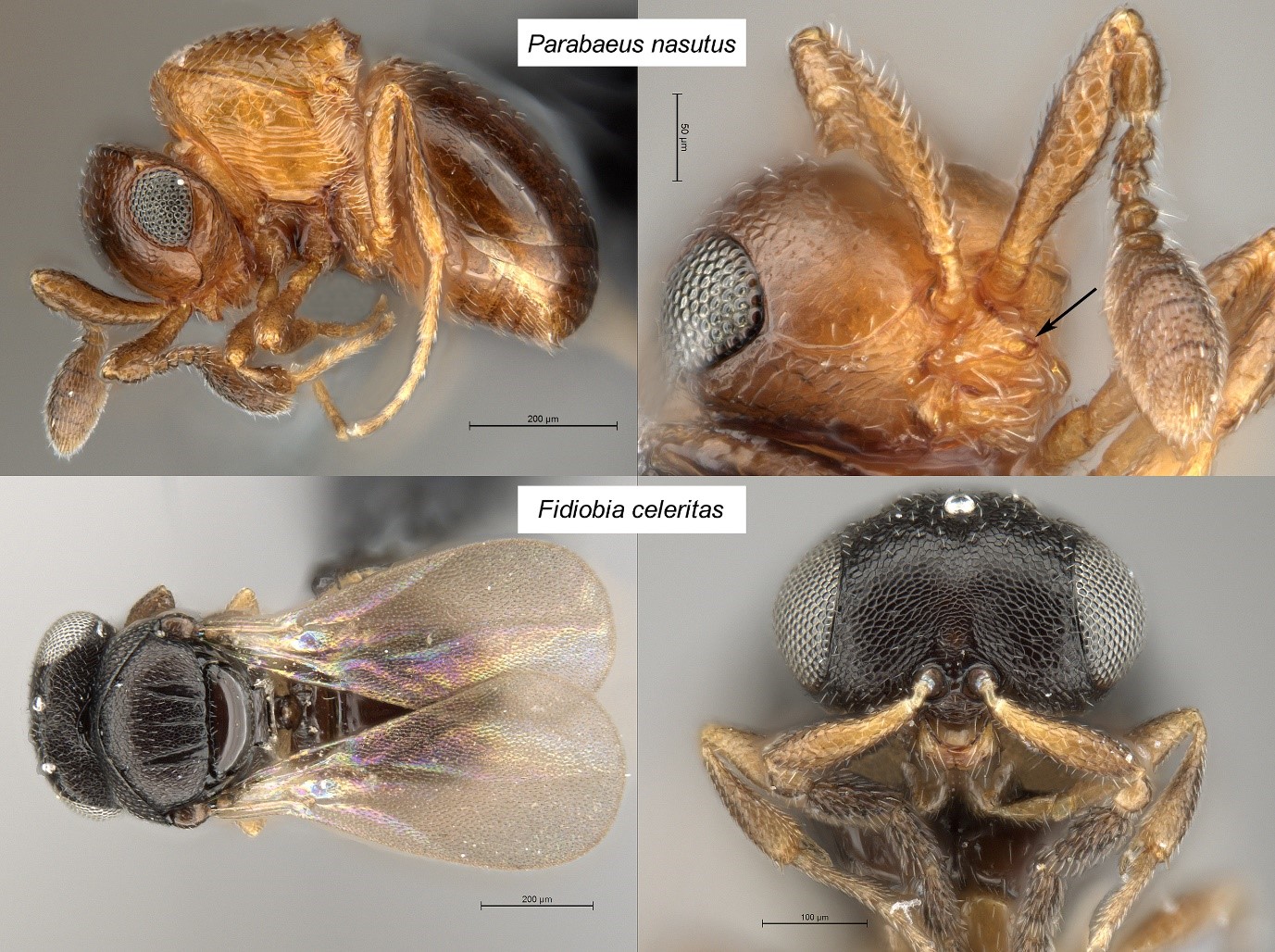 The discovery of the braconid parasitoid wasp Spathioplites phreneticus (Doryctinae) in South Africa is a result of the exploration of the huge diversity of unknown insect species by Iziko entomologists. This rare parasitoid wasp species (described and named in 1962 by Max Fischer based at the Natural History Museum in Vienna) was previously only known from a few specimens collected in Chad in 1959. I collected two specimens of this species during an insect inventory survey undertaken in Tswalu Kalahari Game Reserve in the Northern Cape Province in South Africa, extending the distribution range of this parasitoid wasp species southwards by 4900 km. An additional historical specimen collected in Senegal was discovered in the collections of the Natural History Museum in Paris, extending the species’ range westwards by 4000 km.

These widespread locality records typify how little we know about wasp species and their distribution in Africa. This lack of baseline biodiversity information is simply a result of insufficient surveys of our insect diversity, constrained by a lack of resources and available scientific expertise. The need for these surveys is becoming increasingly critical because this baseline data informs best practice in terms of conserving our natural heritage and ecosystems, the health of which is necessary for our continued quality of life.

This parasitoid wasp attacks wood-boring beetle larvae (Coleoptera, Bostrichidae), which develop inside the branches of the Umbrella thorn acacia (Vachellia tortilis), and via this control mechanism the wasp ensures the continued health of these acacia trees and hence the health of the broader ecosystems that the trees form part of. Documenting parasitoid wasp species and figuring out the role they play in our environment is an essential task, as these species control other insect populations through their parasitoid lifestyle. Without parasitoid wasps we would be inundated with plague outbreaks of insects. 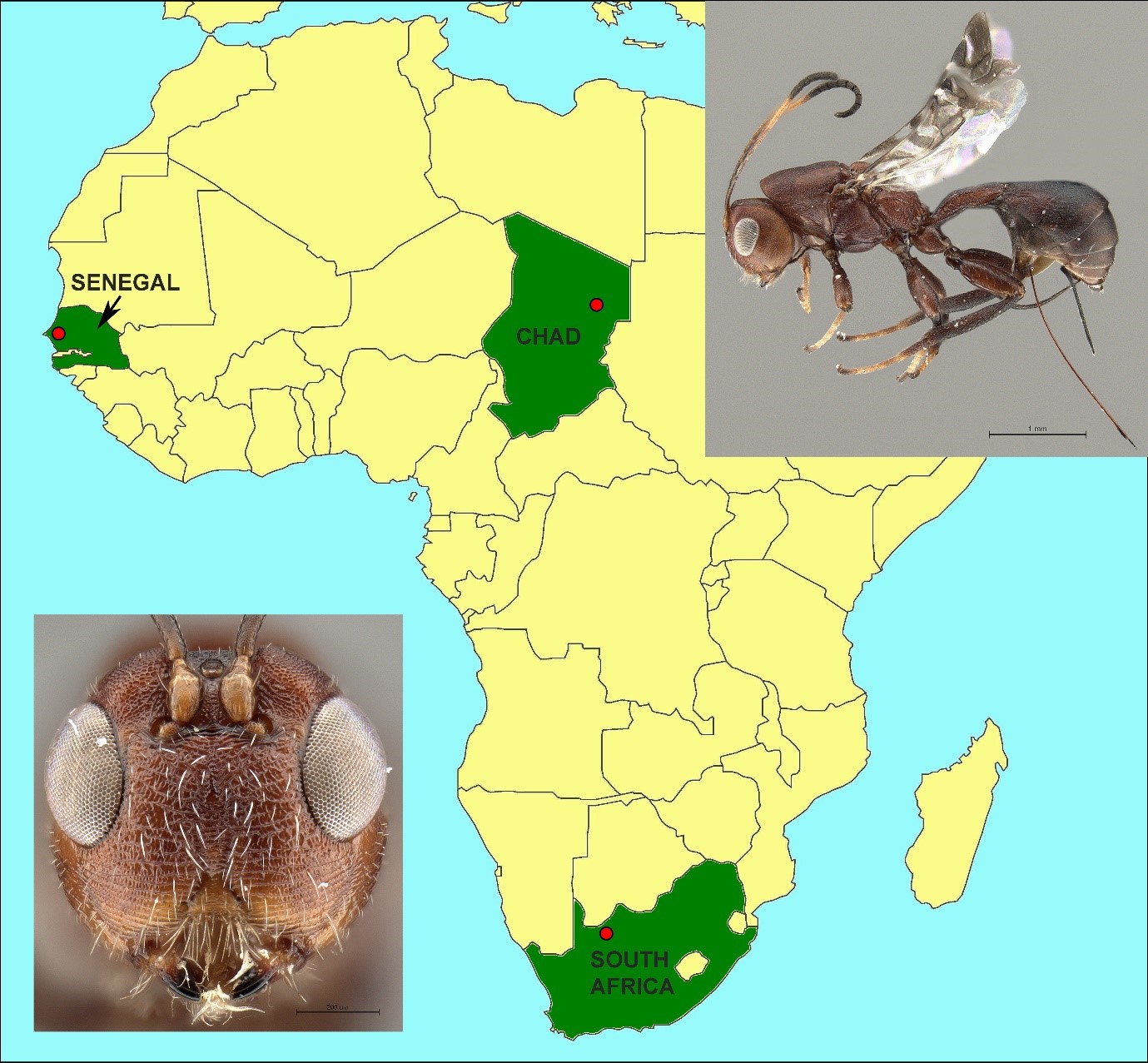 Spathioplites phreneticus  is only known from three localities (depicted by red circles) one each in Chad, Senegal and South Africa. Photographs © Simon van Noort (Iziko Museums of South Africa).

These newly described wasps belong to the extremely diverse insect order Hymenoptera (ants, bees and wasps), which is the focus of entomological research at the Iziko South African Museum.