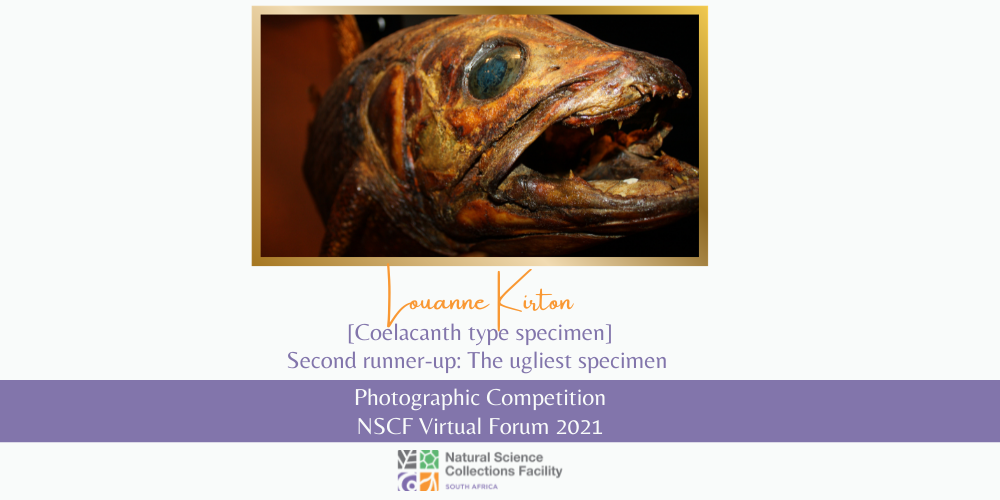 On 22 December 1938, Marjorie Courtenay-Latimer, the Curator of the East London Museum, received a call from the Captain of the Nerine fishing trawler, Hendrik Goosen. He had just returned from trawling off the Chalumna River mouth, about 40 km west of East London, and had a pile of fish on deck. When Marjorie went down to the harbour to wish him Happy Christmas and look through the fish she found the peculiar looking fish and managed to persuade a reluctant taxi-driver to bring it back to the Museum. She tried unsuccessfully to contact Prof. JLB Smith because she knew it was something important. She struggled to preserve it and eventually had to discard the internal organs because she received no reply from Smith who was on holiday. Smith identified it as a coelacanth two months later. This was world news headlines and a reward was also put out, 100 pounds was offered to anyone who could find another coelacanth. 14 years later, another specimen was caught by a fisherman on a Commorian island.

Latimeria chalumnae, 1939 – Holotype – This is the first specimen found of a prehistoric fish that was thought to be extinct for 340 million years. This specimen is known world-wide as it is the Coelacanth Holotype. It is rated one of the top zoological discoveries of the 20th century.

It is an intriguing fish that is more ancient than dinosaurs. It is about 1m in length and has a golden brown colour due to age and the formaldehyde used to preserve it. Originally it was steel-blue with white flecks. The 7 fleshy lobe-fins, bumpy scales and the shape of the tail with an additional small lobe are all characteristic. They are found at depths of over 100 m. They shelter in caves or canyons. They have one of the lowest metabolic rates of all fishes and need little food. They have tiny teeth and swallow prey whole.

They swim slowly and can assume various body positions: headstands, tail stands, upside down or any angle. Caves have a varying number of occupants from day to day, up to 14 in one cave. Coelacanths exhibit no aggressive interactions.

Takeaway: Science may think something is extinct but it can still exist, surprising the world, even the scientists. Science consists of theories that need to be flexible through questioning and change with new findings. Finding and identifying this coelacanth began a whole avenue of further investigation about evolution, other fishes and of four-legged animals on land.